The Salvation Army's Tools For Life

Tools for Life is a life and career skills series of classes.  The Salvation Army Citadel Maine Corps program offers these year round classes, job seeking skills and placement for participants in the Greater Portland, Maine community. The class topics range from “Stress Management,”  “Finding a Career,” “Dress for Success,” “Money Matters,” “Internet Safety,” cooking classes with local restaurant chefs such as  Chef James Tranchemontagne, Owner of the Frog and Turtle Pub , “Etiquette 101” class taught by Andrea Pastore, followed by “Out to Lunch” at DiMillo’s restaurant to practice and polish new etiquette and conversational skills and make new connections. The Business Leader’s Panel Discussion brings in business leaders in the community and Salvation Army Advisory Board members such as business owner Jim Willey and Karen Dobbyn, owner of a business consulting firm. Members of the banking and business community such as Steve Stromsky, Vice President of Key Bank, and Andrea Swenson, owner of Foley’s Gourmet Bakery, who share personal stories and give advice and guidance to the participants as they move forward in their lives.

Khalida came to the U.S. from Jordan in 2009 as a single mother with two boys (ages 5 and 8). She had been a successful engineer in Iraq during the 1980’s and 90’s until the Iraq war started. 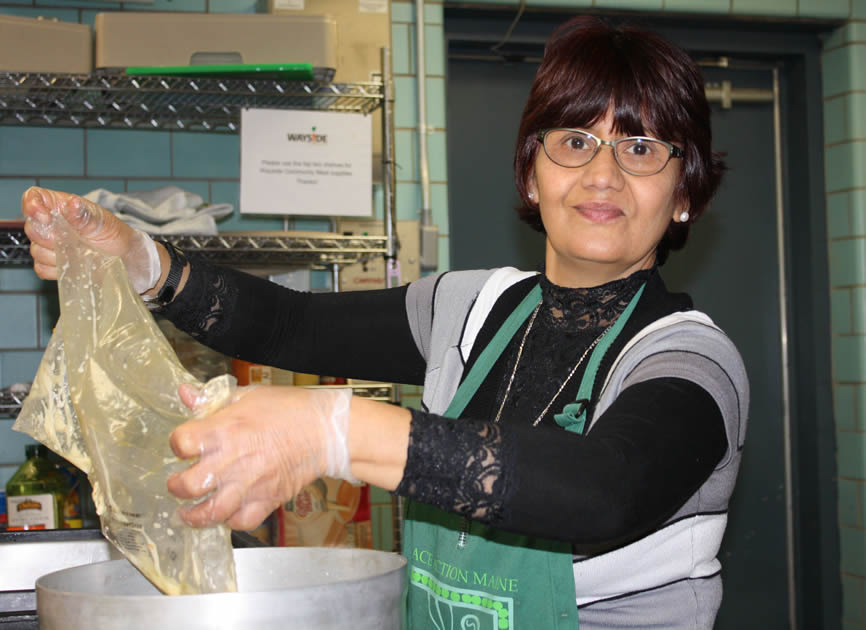 Everything changed in her life after the war, she lost her job, home and some family members. She decided that the U.S. was a better place to start over for both herself and her young children. The city of Portland helped bring peace, health and good education for her children. She began going to The Salvation Army for the Tools for Life classes in 2012.

The Salvation Army Senior Center for Healthy Aging gave her an opportunity to give back and prepare meals for the elderly. Her young sons would also volunteer in the Senior Center during their school vacations and in the summer.  Khalida later supervised the senior meal prep and other kitchen volunteers. Many of the volunteers were seeking asylum and volunteering until they received their work papers, other volunteers were in residential programs working toward having fulltime jobs, housing and independent lives.

Khalida’s cooking skills were honed in The Salvation Army’s professional kitchen and her confidence and sense of self worth increased as she performed this valuable work to the community. Khalida was encouraged by The Salvation Army and Brenda Bracy at the University of Maine Cooperative Extension (a Tools for Life cooking instructor) to enter the King Arthur’s Flour Pie Contest and she won 1st and 3rd place in the contest for the past 2 years! During the 2015 Christmas season Andrea Swanson, opened Foley’s bakery on Sunday when it is usually closed, and allowed Khalida and several Tools for Life participants, to make hundreds of Christmas cookies and gingerbread men (with chocolate dipped boots) for the Santa’s Workshop volunteers at The Salvation Army Portland Citadel Corps.

Khalida hopes “ to keep giving back and thanks everyone - especially The Salvation Army who provided opportunity for my family in Maine. I will also keep pushing my children to be successful so they will attend college someday. I want them to be successful in life and role models for others.”